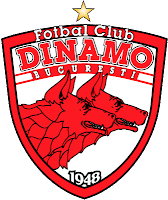 On 14 May 1948, Dinamo Bucureşti formed from the merger of two pre-existing clubs and has since gone on to become one of Romania's most successful teams.

The two clubs that came together were Unirea Tricolor, winners of the 1941 national title, and Ciocanul, formerly known as Maccabi Bucureşti. In 1947, the new Communist government assigned control of both clubs to the Ministry of the Interior, who merged them into Dinamo Bucureşti. Both teams remained intact for the 1947-48 season, in which Ciocanul played as "Dinamo A" and finished eighth, while Unirea played as "Dinamo B" and were relegated.

The new Dinamo maintained the eighth-place finish in their first season, 1948-49, but quickly rose to the top of the table, finishing as runners-up in 1951, 1952, and 1953 before winning their first title in 1955. They have since increased their collection of league titles to eighteen, second only to rivals Steaua Bucureşti's 24, though their most recent one came in 2005. In addition, they have also won the Romanian Cup thirteen times, most recently in 2011.