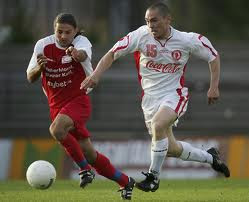 Organized by FC St. Pauli, the Wild Cup was an alternative tournament for nations excluded by FIFA, global football's governing body. The organizers openly mocked FIFA by creating a mock federation of their own named FIFI. Six teams participated, including Greenland, the Turkish Republic of Northern Cyprus, Zanzibar, Tibet, and Gibraltar. The sixth team was FC St. Pauli, playing as the Republic of St. Pauli. The entire tournament was organized in under three months, despite token resistance from FIFA, the German football federation (who were hosting the World Cup later that summer), and China, who opposed Tibet's inclusion.

Played at St. Pauli's home ground, the Millerntor-Stadion in Hamburg, the opening match kicked off after an announcer declared it a "Sepp Blatter-free zone." After the 1-1 draw, St. Pauli went on to win their three-team group, but lost in the semifinals to Zanzibar, 1-2. Northern Cyprus, the other group winner, went on to beat Zanzibar in the final on penalties, 0-0 (4-1).
Posted by Brian Seal at 12:01 AM