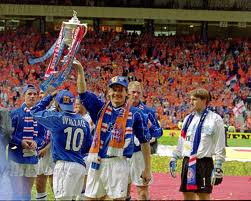 On 27 May 2000, Rangers defeated Aberdeen in the Scottish Cup Final, making them the first club in the world to secure 100 major trophies.

Founded in 1872, Rangers started the 1999-2000 season with 98 major trophies, including 48 league titles, 28 Scottish Cups, 21 Scottish League Cups, and one UEFA Cup Winners' Cup. They had the chance to take four more trophies that season, but were eliminated from the Scottish League Cup and the UEFA Cup in December.

The focus on their two remaining competitions paid off--they clinched the league title on 22 April after Celtic's draw with Hibernian left the former 17 points adrift of Rangers with only five matches left to play. Rangers proceeded to finish 21 points clear of their Old Firm rivals in the final table.

That left the Scottish Cup Final, played before a crowd of over 50,000 at Hampden Park. Although Aberdeen had knocked Rangers out of the League Cup in the quarterfinals, 0-1 (aet), the Scottish Cup Final was not as close a contest. Rangers won 0-4 with goals from Giovanni van Bronckhorst (36'), Tony Vidmar (47'), Billy Dodds (50'), and Jörg Albertz (51').

Since then, Rangers have continued to add to their silverware collection with five more league titles, four more Scottish Cups, and one more League Cup.