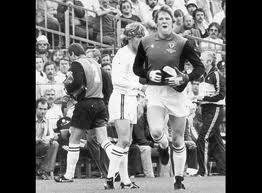 On 26 May 1982, Aston Villa won the European Cup over Bayern Munich with an outstanding performance from an unlikely hero.

Playing before a crowd of 45,000 at the Feyenoord Stadion in Rotterdam, Villa started the match as decided underdogs to three-time champion Bayern. And their hopes took another hit when their starting goalkeeper, Jimmy Rimmer, had to leave the match after only 10 minutes. He had injured his neck previously and was relying on painkillers to see him through the day, but he could not make it and had to withdraw. Villa sent on his replacement, 23-year old Nigel Spink. Despite joining the club in 1977, Spink had made only one other appearance with the first team.

His inexperience did not show, however, and he made several dazzling saves to deny the Germans, who boasted three of the tournament's top four scorers (Dieter Hoeness, Karl-Heinz Rummenigge, and Paul Brietner).

Villa scored the day's only goal in the 67th minute. Forward Gary Shaw delivered a cutting pass down the left to midfielder Tony Morley, who dodged a couple of Bayern defenders and slipped the ball behind them and across the goalmouth. Forward Peter Withe was waiting there and tapped the ball into the net for the win. Commentator Brian Moore famously announced the goal by saying "Shaw, Williams, prepared to venture down the left. There's a good ball in for Tony Morley. Oh, it must be and it is! It's Peter Withe!"

Spink remained with Villa until 1996, making a total of 460 appearances before moving to West Brom.