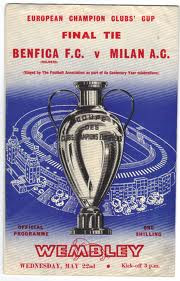 On 22 May 1963, AC Milan stopped Benfica from winning their third straight European Cup, beating the Portuguese side 2-1 at Wembley. It was the first of Milan's 7 European Cup/Champions League titles and the first time an Italian team won the tournament.

At the time, Benfica were staking their claim as the best team in the world, coming off back-to-back tournament titles with Final wins over Barcelona (3-2 in 1961) and Real Madrid (5-3 in 1962). They also boasted one of the sport's biggest stars in Eusébio, who late brace provided the winning margin in the previous Final.

Mian, however, had stars of their own, including forward José Altafini, who played for Brazil in the 1958 World Cup then for Italy in the 1962 tournament. The Rossoneri had been in the Final before, taking Real Madrid to extra time in 1958 before falling 3-2.

Playing before a crowd of 45,700, Benfica took the lead with an 18th-minute strike from Eusébio, who sprinted down the middle of the pitch and blasted a right-footed shot past Milan keeper Giorgio Ghezzi. It took Milan 40 minutes to find an equalizer, as Altafini unleashed a right-footed shot of his own from the edge of the box. Just eight minutes later, Altafini found himself in a one-on-one situation with Benfica keeper Costa Pereira. Pereira successfully stopped the initial shot, but Altafini slammed the rebound home to give Milan the 2-1 lead that was the match's final score.

Milan went on to win the tournament a total of seven times, second only to Real Madrid's nine. Benfica returned to the Final five more times and were runners-up each time, most recently in 1990 when they lost again to Milan.