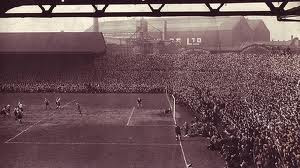 Designed by famed architect Archibald Leitch and completed in 1909, the stadium was originally named United Football Ground, but was renamed to Old Trafford in 1936. With an original terraced capacity of just under 80,000, it was one of England's largest grounds and hosted some prominent matches, including English internationals and FA Cup Finals.

In 1939, it served as the venue for one of the FA Cup semi-finals. A stadium-record crowd of 76,962 people turned out to watch Wolverhampton Wanderers beat Grimsby Town 5-0. The victory sent Wanderers to the Final at Wembley, where they lost to Portsmouth.

In the early 1990s, the club converted the stadium to an all-seater, following the recommendation of the Taylor Report following the 1989 Hillsborough Disaster. The capacity dropped at that point to around 44,000. Subsequent additions, however, have increased the stadium close to its pre-Taylor Report levels and it currently boasts a capacity of 75,957.
Posted by Brian Seal at 12:01 AM