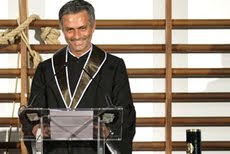 On 23 March 2009, the Technical University of Lisbon awarded an honorary doctorate to manager José Mourinho in recognition of his professional success. It is one of 30 individual accolades received by Mourniho during his managerial career.

He had graduated from the university almost 20 years earlier with a five-year degree in sports science. His mother had enrolled him in a business administration program, but Mournho dropped out after the first day and decided to concentrate on sport instead. According to his mother, he went through the physical education program "like a bullet, with excellent marks."

Upon graduation, he took coaching programs offered by the English and Scottish FAs with an eye toward becoming a manager. He got his start as the youth team coach for his hometown club, Vitória de Setúbal, then moved his way up the ladder to take his first head coaching position with Benfica in September 2000.

Since then, he has established himself as one of football's greatest managers with stints at UD Leiria (2001-02), Porto (2002-04), Chelsea (2004-07), Inter (2008-10), and his current club, Real Madrid. Along the way, he has collected a massive haul of silverware that includes six league championships and two Champions League titles. Individually, he has won several manager of the year awards, including the UEFA Manager of the Year (2003, 2004) and the International Sports Press Association Best Manager of the Year award (2010).
Posted by Brian Seal at 12:01 AM