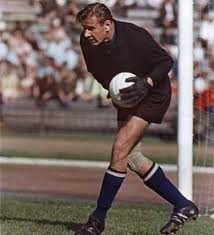 On 20 March 1990, Dynamo Moscow star Lev Yashin died. Nicknamed "the Black Spider" for his customary all-black kit, he is remembered by many as the greatest goalkeeper in history.

Born in Moscow, Yashin spent his entire professional career with Dynamo, making 326 league appearances from 1949 to 1971. In the process, he won five league titles and three Soviet Cups. Once, when asked about his incredible record for stopping penalty kicks, he said the secret was "to have a smoke to calm your nerves, then toss back a strong drink to tone your muscles."

Despite his success with Dynamo, he rose to international fame as keeper for the Soviet national team. He earned his first cap in 1954 and was instrumental in their gold medal winning 1956 Summer Olympics campaign, allowing only two goals in the tournament. He was equally frugal in the 1960 European Championship, again allowing only two goals in the tournament as the Soviet Union won the inaugural tournament.

In 1963, the year he captured his fifth league title with Dynamo, he won the Ballon d'Or, becoming the first--and to date only--goalkeeper to win the award.

He suffered a knee injury in 1986 that led to the amputation of one of his legs. That created complications that led to his death in 1990. Four years later, FIFA created the Lev Yashin Award, given to the best goalkeeper at the World Cup.