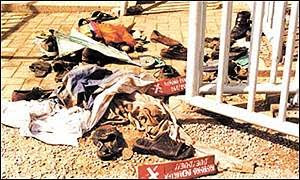 On 9 May 2001, 126 football fans died at the Accra Sports Stadium, making it Africa's worst ever sports-related disaster. It was one of several such incidents in Africa over a period of less than a month, including similar disasters in South Africa (43 killed on 11 April), the Congo (14 killed on 29 April), and the Ivory Coast (39 killed on 6 May).

The fans were in Accra that night to watch a derby match between hosts Hearts of Oak and fellow Accra club Asante Kotoko. The visitors were up 1-0 near the end of the match, but Hearts of Oak scored two late goals to take the lead. With about five minutes left, frustrated Asante Kotoko supporters began ripping seats out of the stands and throwing them onto the pitch. The police responded by firing tear gas into the crowd, causing a panic. Most of the victims were crushed in the ensuing stampede, while a few died from suffocation.

Although six policemen were charged with manslaughter, authorities later determined that the tragedy was compounded by the fact that several stadium gates were locked at the time, preventing the crowd from escaping.

The Ghanian government established a special scholarship for children of the victims and also erected a memorial statue at the stadium, which has since been renamed Ohene Djan Stadium.
Posted by Brian Seal at 12:01 AM