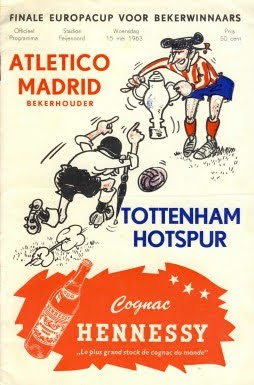 On 15 May 1963, Tottenham Hotspur became the first British club to win a European trophy by beating defending champions Atlético Madrid 5-1 in the European Cup Winners' Cup Final. And Spurs were truly a British club - all eleven starters and manager Bill Nicholson were from the Home Countries of England, Scotland, Wales, and Northern Ireland.

As its name implies, the Cup Winner's Cup, which was first played in the 1960-61 season, pitted the various winners of the European domestic cup competitions against each other. Spurs reached the Final with wins over previous finalists Glasgow Rangers in the first round, followed by wins over Czech side Slovan Bratislava and Yugoslavia's OFK Beograd. Atlético's road to the Final was paved with victories over Maltese side Hibernians, Bulgaria's Botev Plovdiv, and Germany's Nuremberg.

Played at Rotterdam's Feyenoord Stadium before a crowd of 49,000, the Final was close for about a half. Tottenham forward Jimmy Greaves scored first in the 16th minute, then his fellow forward John White extended the lead to 2-0 in the 35th minute. The Spanish side pulled one back shortly after the break, when forward Enrique Collar converted a 47th-minute penalty kick, but it was all Spurs after that.

Forward Terry Dyson restored the two-goal advantage with a 67th-minute strike, then both he and Graves completed braces (Greaves 80', Dyson 85') to finish the match 5-1.