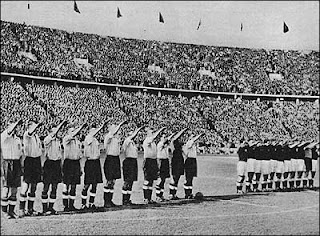 On 14 May 1938, England opened their European tour by defeating Germany 6-3 at Berlin's Olympic Stadium before a crowd of 110,000, including several high-ranking Nazi officials. But the match is best remembered for the political statement made by the English players, all of whom gave the infamous Nazi salute at the start of the match.

The salute was an effect of Britain's appeasement policy at the time, intended to show the Germans that England respected their sovereignty. To the players' credit, when first asked to give the salute, they refused. The request came from a Football Association official who entered the dressing room as the players were preparing for the match and asked them to give the salute during the playing of the German national anthem. According to inside-right Stanley Matthews "The dressing room erupted. There was bedlam. All the England players were livid and totally opposed to this, myself included. Everyone was shouting at once. Eddie Hapgood, normally a respected and devoted captain, wagged his finger at the official and told him what he could do with his Nazi salute, which involved putting it where the sun doesn't shine."

The official left the dressing room, but returned with a direct order from the British Ambassador to Germany, Sir Neville Henderson, who instructed the players to give the salute. Henderson informed them that the political relationship between England and Germany at the time was so sensitive that failure to show deference could be the "spark to set Europe alight."

Faced with the apparent choice between giving the salute and starting World War II, the English players (pictured above, in the white shirts) raised their arms. Less than sixteen months later, England and Germany were at war. The act drew fierce criticism from the British press and still does. The BBC recently called it "one of England's darkest moments in the sport."
Posted by Brian Seal at 12:01 AM