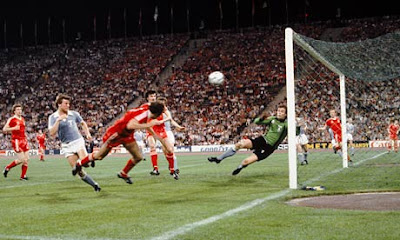 On 30 May 1979, Nottingham Forest won their first European trophy, beating Malmö FF in the European Cup Final before a crowd of 57,000 at the Olympiastadion in Munich. It was an incredible accomplishment for Forest, who became only the third English side - after Manchester United and Liverpool - to claim Europe's biggest prize.

Forest were riding a wave of success under manager Brian Clough, who had taken Derby County to the European Cup semifinals six years earlier. After leaving Derby and suffering through a brief spell at Leeds, Clough moved to Forest in January 1975. Though they were in the Second Division at the time, Clough steered them to promotion in 1977, then to the League title in 1978.

In the European Cup, Forest advanced with wins over Liverpool, AEK Athens, Grasshopper, and Köln. Malmö, who were also playing in their first European Cup Final, reached it by beating Monaco, Dynamo Kiev, Wisła Kraków, and Austria Vienna.

Despite the participation of two relative Cinderella teams, the match itself was anticlimactic. Malmö, dealing with the loss of key players to injury, played a defensive game to slow the English attack. But Forest secured the match's only goal near the end of the first half, as their £1 million signing Trevor Francis - making his first European appearance for Forest - scored a 45th-minute header (pictured) that turned out to be the matchwinner.

Forest successfully defended their title the next season, beating Hamburg 1-0.