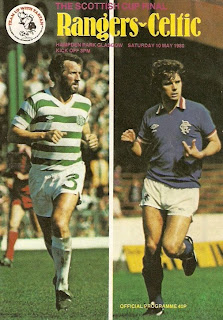 On 10 May 1980, Celtic won their 26th Scottish Cup, beating Rangers 1-0 before a crowd of over 70,000 at Glasgow's Hampden Park. The match itself was overshadowed by the pitch invasion afterward, followed by a riot among the rival supporters.

The Final was the last chance for either team to claim a major trophy that season, as both had been eliminated from the League Cup and Aberdeen had won the SPL a week earlier, one point ahead of second-place Celtic. Rangers finished back in fifth place.

Nevertheless, the Final itself was fairly tame. Neither team created many chances and they were scoreless after 90 minutes. Celtic found the advantage in extra time as forward George McCluskey diverted a Danny McGrain volley past Rangers keeper Peter McCloy. It was the only goal of the match, enough to give Celtic the 1-0 win and the Scottish Cup.

As the referee blew the final whistle, a multitude of Celtic supporters rushed onto the pitch. But what started as a victory celebration soon turned into a full-scale riot, as Rangers supporters joined their opposite number on the pitch and several fights broke out. The police tried to separate the two groups, but were hopelessly outnumbered.

Afterward, the SPL determined that alcohol had been a major contributor to the violence and banned its sale at league matches. Despite recent pleas to lift the ban, it remains in place.