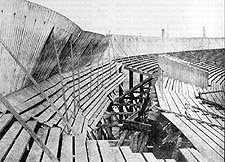 On 5 April 1902, during a match between the Scottish and English national teams at Ibrox Park in Glasgow, the West Tribune Stand collapsed, killing 25 people and injuring 547 others.

Close to 80,000 people were in attendance to watch the match between Scotland and England, the first one contested between entirely professional sides. It was the final scheduled match of the 1902 British Home Championship, with the title yet to be decided. A win for either side would have delivered the championship, while Scotland could also have claimed the title with a draw.

The stadium was state-of-the-art, having just been built by Rangers in 1899 for the then-substantianal cost of £20,000. Early in the match, however, a portion near the top of the western terrace (pictured above) collapsed, dropping several hundred people a distance of 40 to 50 feet. The majority of the 25 fatalities were caused by impact, either from the fall or by debris from the collapsing structure. Three people reportedly died from shock trauma or heart failure.

The collapse caused a panic in the crowd, forcing people onto the pitch. The game was halted for approximately 20 minutes, then resumed, with the teams playing to a 1-1 draw. After the extent of the injuries was revealed, the match was declared void. The teams held a replay on 3 May 1902 at Villa Park in Birmingham. The result was another draw, this time 2-2, giving the title to Scotland.

The contractor who built the western terrace faced criminal prosecution later that year, but was acquitted of any wrongdoing in connection with the collapse.
Posted by Brian Seal at 12:01 AM