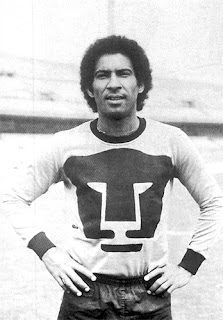 On 28 April 1948, Evanivaldo Castro was born in Salvador de Bahia, Brazil. Better known as "Cabinho," he spent the majority of his career in Mexico, where he was one of the league's top goalscorers.

He started his career for Brazilian club Flamengo, but played only six matches for them before moving in 1974 to Mexico's Club Universidad Nacional, better known as the UNAM Pumas. He made an immediate impact, scoring 16 goals his first season, then becoming the team's leading goalscorer for the next four seasons (though he shared that title in 1978-79 with teammate Hugo Sánchez). With Cabinho providing the attack, UNAM won their first league title in 1977.

In 1979, he transferred to Atlante FC, where he continued his scoring touch, leading the team in goals in each of his first three seasons. He later played for Club León and UANL Tigres, in between returning to Brazil for a one-year stint with Paysandu. In all, he scored 312 goals in 415 matches for Mexican sides.