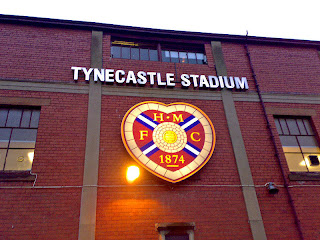 On 10 April 1886, Heart of Midlothian F.C. opened its current ground, Tynecastle Stadium, with a 4-1 win in a friendly against English side Bolton Wanderers. Located on Edinburgh's Gorgie Road, the stadium has hosted a number of historic matches and undergone several renovations since that first match, including the construction of the old Main Stand by famous stadium architect Archibald Leitch.

Tynecastle hosted its first international match on 26 March 1892, a British Home Championship contest between Scotland and Wales. The Scots won by the score of 6-1.

Tynecastle's record attendance is 53,396, acheived for Hearts' 3rd-round Scottish Cup match against Rangers on 13 February 1932, which Hearts lost 0-1. Due to its conversion to an all-seater, however, and other renovations, Tynecastle's current capacity is a meager 17,420.

In 2004, in an effort to curb the club's rising debt, Hearts chief executive Chris Robinson announced plans to sell the stadium, claiming that it was no longer suitable. Hearts supporters strongly opposed the plan, however, and responded with the "Save Our Hearts" campaign to block the sale. The sale was canceled upon Vladimir Romanov's purchase of the club in January 2005. Romanov has since applied for permits to increase capacity to 23,000 for the 2010-11 season.
Posted by Brian Seal at 10:00 AM