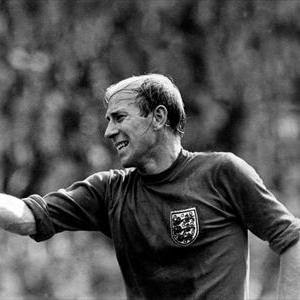 On 19 April 1958, 20-year old Manchester United striker/midfielder Bobby Charlton made his international debut for England in a British Home Championship match against Scotland at Hampden Park, Glasgow. England won 4-0, with two goals from Derek Kevan, one from Bryan Douglas, and one from Charlton - his first in an English record of 49 international goals. His last international goal came in England's 4-0 win over Colombia in a friendly played on 20 May 1970 in Bogotá.

Charlton played for the English national team through the 1970 World Cup, where England was knocked out in the quarterfinals by Franz Beckenbauer's West German side. In all, Charlton made 106 national team appearances, a record at the time, though later surpassed by Bobby Moore (108), David Beckham (109), and Peter Shilton (125). Charlton now stands as the fourth most-capped player for England. His goal-scoring record still stands, however, almost 39 years after that last goal in Colombia.
Posted by Brian Seal at 12:01 AM