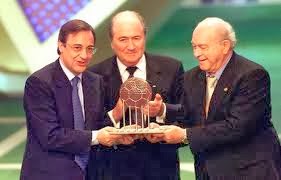 On 23 December 2000, FIFA recognized Real Madrid as the Club of the Century.

The award was part of a series of centennial honors organized by FIFA for the end of 2000, including both make and female Players of the Century. The latter two were selected by an international jury, readers of FIFA's website, and subscribers to the bi-monthly publication FIFA Magazine. Club of the Century, however, was chosen exclusively by the magazine subscribers.

When the results were revealed, Real Madrid were the overwhelming choice, receiving just over 42% of the vote while no other club crossed the 10% mark. The other vote recipients in the top five were Manchester United (9.69%), Bayern Munich (9.18%), and Barcelona (5.61%), while Santos and Ajax were tied at 5.10%.

The Player of the Century awards were split, with Pelé and Diego Maradona sharing one and Michelle Akers and Sun Wen sharing the other.