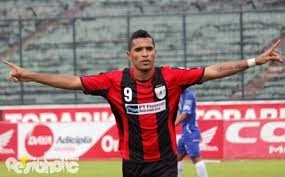 Winners of the Indonesia Super League in 2008-09, Persipura were campaigning to defend the title, but started the new season in disappointing fashion by winning only two and losing three of their first nine league matches. But they had an opportunity to get on track against newly-promoted PSPS Pekanbaru in their tenth match.

A meager crowd of only 500 showed up at Persipura's Stadion Andi Mattalatta for the match and saw the hosts go up 2-0 in the first half with a brace from Brazilian midfielder Beto Gonçalves (23', 33'). Persipura held that lead until late in the second half, when PSPS finally found the net in the 89th minute. But that was the final goal of the game, which ended 2-1.

Persipura went on to go unbeaten over the rest of the season, but it wasn't enough to hold on to the title; they finished as runners-up to Arema by six points. The run extended into the next season, however, reaching a total of 37 games and helping Persipura reclaim the league title in 2010-11.
Posted by Brian Seal at 12:01 AM