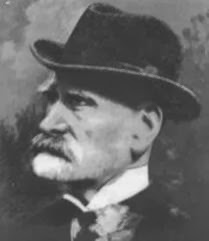 On 19 December 1863, the first match to be played under the FA's new Laws of the Game ended in a scoreless draw.

Prior to that, most clubs used either the Cambridge Rules, which allowed players to use their hands but prevented running with the ball, and the Shefffield Rules, which allowed players to push or hit the ball with their hands, but not carry it. Clubs were free, however, to adopt their own sets of rules. Led by Ebenezer Cobb Morley (pictured), the Football Association formed in October 1863 and, in a series of meetings that stretched into December, crafted a uniform set of laws.

Morley prepared the new rules, which still allowed players to catch the ball, but not run with it in their hands, and the FA approved them on 8 December. They organized a match to be played in January, but soon decided that they could not wait and pushed the date up to 19 December.

Barnes FC, whose roster included Morley, hosted Richmond FC at Limes Field, where the game ended 0-0. While the match didn't lead to the immediate universal adoption of the FA's new rules, they eventually became the official laws for association football and were later modified into the current Laws of the Game.
Posted by Brian Seal at 12:01 AM