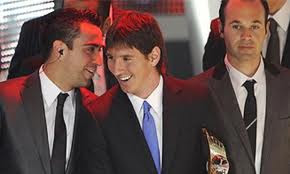 On 6 December 2010, FIFA and France Football magazine announced the three finalists for the inaugural FIFA Ballon d'Or. And all three were from FC Barcelona.

The award was a combination of France Football's Ballon d'Or, started in 1956, and FIFA's World Player of the Year award, which began in 1991. In 2010, the two organizations agreed to merge their awards, calling the new honor the FIFA Ballon d'Or.

They announced their shortlist of 23 players on 27 October, then culled the list to the top three vote-getters on 6 December. The three were Barcelona's Xavi, Andrés Iniesta, and Lionel Messi, who had won both the Ballon d'Or and the FIFA World Player of the Year award in 2009. Although Barcelona had won La Liga in 2010, the inclusion of Xavi and Iniesta was due in part to their World Cup-winning run with Spain the previous summer. But Messi went on to win the award when it was announced in January 2011.

It was not the first time that a single club took the top three spots in Ballon d'Or voting: AC Milan did it in 1988, when Marco van Basten beat out Ruud Gullit and Frank Rijkaard, then again in 1989, when van Basten won it again, that time over Rijkaard and Franco Baresi.
Posted by Brian Seal at 12:01 AM