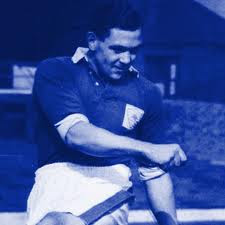 On 19 December 2002, striker Arthur Rowley died at the age of 76. His career total of 434 goals remains an English league record.

Born in Wolverhampton in 1926, Rowley began his professional career in 1944 with West Brom. He failed to settle at the Hawthorns, however, and moved to Fulham in 1948. There, his 19 goals helped the Cottagers win the Second Division, but his scoring touch left him in the top flight and Fulham sold him on to Leicester City in 1950.

He flourished at Leicester, knocking in 28 goals in his first season there. In his second season, he increased his tally to 38, then raised it again the next year to 41. In all, he scored a total of 265 goals in 321 appearances for the Foxes, making him their second all-time leading scorer, behind Arthur Chandler (273 in 419 appearances). His best season was 1956-57, when his total of 44 set a club record for a single season.

In the summer of 1958, Leicester manager Dave Halliday sold Rowley to Shrewsbury as player-manager (an unpopular move among Leicester fans and one that contributed to Halliday's sacking later that year). Rowley continued to score in waves, netting 38 times in his first season there--and setting another club record for single season. By the time he retired from playing in 1965, he was the club's all-time leading scorer with 152 league goals.

He remained with Shrewsbury as manager for another three years and later took charge of Sheffield United (1968-69), Southend United (1970-76), and Knighton Town (1976) before retiring for good.
Posted by Brian Seal at 12:01 AM