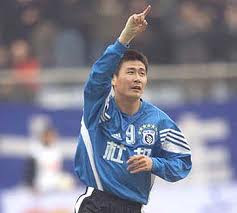 The 27-year old spent the first ten years of his career with rivals Bayi FC, where he had scored 19 goals in 48 league appearances. But in 1997, he moved to Dalian for a club-record fee of 2.2 million yuan. Dalian were already a successful side, having won the Chinese top flight title in 1994 and 1996 (having gone undefeated in the latter season with 12 wins and 10 draws), but the addition of Hao improved both club and player.

At Dalian, Hao began scoring at a blazing pace, eventually winning the league's golden boot with a total of 14. But his biggest haul came on 10 December when he put four past the keeper in a 5-2 rout of Guangdong Hongyuan. It matched the single-match goal record set by Hu Zhijun in 1994 and, though it has been repeated on six subsequent occasions, it has never been topped.

Dalian proceeded to win the league title that season with 15 wins, 6 draws, and 1 loss to better their points tally from the previous season, and also won that year's Chinese Super Cup. They repeated as league champions in 1998 with Hao repeating as the golden boot winner. Before he left for Sheffield United in 2005, he was the league's all-time top scorer with 96 goals in 185 appearances (though he was later passed by Li Jinyu, who scored 120 goals in 251 appearances between 1999 and 2010).
Posted by Brian Seal at 12:01 AM