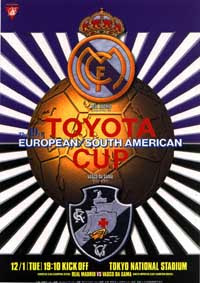 Champions League winners Madrid were making their third appearance in the competition, after winning it in 1960 and losing it in 1966 (both times against Peñarol). It was the first appearance for Vasco, who had won the Copa Libertadores the previous August.

A crowd of 54,514 gathered at Tokyo's National Stadium to watch the match, with Madrid taking a first-half lead thanks to an own goal--in attempt to head away a cross from Roberto Carlos, Vasco midfielder Nasa deflected the ball past his own goalkeeper in the 25th minute. Undaunted, the Brazilians pressed forward for an equalizer and were rewarded in the 56th minute. Madrid's German goalkeeper, Bodo Illgner, parried one shot, but knocked the ball into the path of Nasa's midfield partner Juninho, who placed it perfectly into the top right corner.

Both teams had several chances to take the lead, but were denied repeatedly by brilliant play from both keepers (and, in Vasco's case, a couple of near misses). Real Madrid forward Raul then struck the decisive blow in the 83rd minute when he outraced the Vasco back line to latch onto a long ball, beat two defenders, and slipped the ball past keeper Carlos Germano.

It was Vasco's only appearance in the competition, while Real Madrid returned twice more, winning it again in 2000.