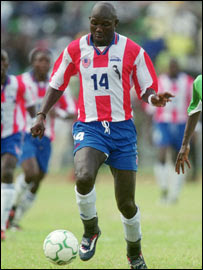 On 28 January 2002, former FIFA World Player of the Year George Weah ended his 19-year international career as Liberia bowed out of the African Cup of Nations.

Weah, considered my many to be the greatest player Africa has ever produced, was born in Monrovia in 1966. After starring for a handful of African sides, including Mighty Barolle, Invincible Eleven, Africa Sports, and Tonnerre Yaoundé, he joined the Liberian national team in 1988, the same year he moved to Europe to play for Arsène Wenger's Monaco side.

For the next 12 seasons, Weah established himself as one of the world's best strikers, playing for Monaco (1988-92), PSG (1992-95), and AC Milan (1995-2000). In 1995, he won a league and cup double with PSG, while taking them to the semifinals of the UEFA Champions League as the tournament's top scorer. That year's performance earned him several individual awards, including the FIFA World Player of the Year, the Ballon d'Or, and his third African Footballer of the Year award (the previous two came in 1989 and 1994).

Despite his success at the club level, however, Weah never replicated it with Liberia. Like his namesake George Best, he is one of the most famous players never to appear at the World Cup--the closest he came was in 2002, when Liberia fell one point shy of qualification. His appearance on 28 January 2002 was his 60th for Liberia, who were eliminated from the Cup of Nations that day after falling to Nigeria, 0-1.

Weah retired in 2003 after playing for a series of different clubs including Chelsea (2000), Manchester City (2000), Marseille (2000-01), and Al-Jazira (2001-03). Afterward, he moved into politics, making an unsuccessful run for the Liberian presidency in 2005. He remains politically active, recently announcing his intention to stage another Presidential campaign in 2011.