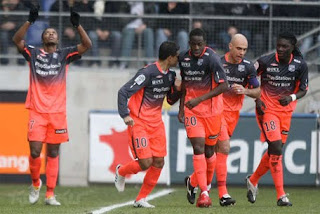 French law is more restrictive than other countries with regard to shirt sponsors, including a prohibition on alcohol advertisements that has forced visiting foreign sides like Liverpool, Celtic, and Rangers to either cover or remove their sponsors before playing matches in France. Nevertheless, before the 2009-10 season, Lyon reached an agreement with Paris-based gambling website BetClic despite the fact that existing French law prohibited the advertising of such websites on football shirts.

Lyon officials pressured the French government to lift the ban before the season started. The authorities refused, however, and warned Lyon to expect penalties should they proceed to wear the BetClic shirts. Lyon capitulated and, for the first five months, played without a sponsor. But by January, the loss of sponsor-related income proved too much to bear and the club reached out to Sony. The Japanese company used Lyon's shirts to advertise their Playstation 3 console, but the agreement was limited and did not include European matches. That led to an awkward moment for Lyon and BetClic in the Champions League, when Lyon wore sponsorless shirts for a match at Real Madrid, who were sponsored by BetClic's rival, Bwin (see video below).

France eventually lifted the ban in 2010, allowing both Lyon and Marseille, who signed with the website for the 2010-11 season, to wear the BetClic shirts.