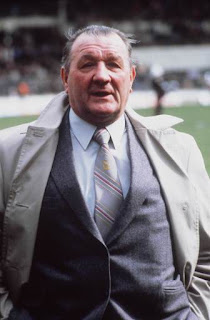 Paisley joined the club as a half-back in May 1939, making the move from non-League side Bishop Auckland FC. But World War II intervened, so he did not make his first appearance until January 1946, almost 7 years later. Despite the delay, he quickly established himself as a regular in the first team, making 253 League appearance before his retirement in 1954, winning both the 1947 League title and the 1950 FA Cup (Paisley did not play in the Cup final, but played in enough matches to earn a winner's medal).

After hanging up his boots, he remained with the club as a staff member, first as a physiotherapist, then as a reserve coach. He was there when Shankly arrived in December 1959 and helped the new boss guide the Reds to unparalleled heights, winning three League titles, two FA Cups, one UEFA Cup, and one European Cup Winners' Cup. When Shankly retired unexpectedly after the 1973-74 season, Paisley took up the reins.

Under Paisley, Liverpool amassed a monumental silverware collection, including 6 League titles, 3 European Cups, one UEFA Cup, 3 League Cups, one European Super Cup, and one Intercontinental Cup. Paisley himself won 6 Manager of the Year Awards. When discussing his amazing run of success, Paisley once quipped "Mind you, I've been here during the bad times, too. One year we came second."

See a video tribute to Paisley here.
Posted by Brian Seal at 12:01 AM