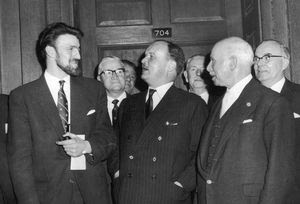 On 18 January 1961, England finally lifted the wage restriction for footballers that had previously capped their earnings at £20 per week (£17 in the close season).

The wage limit was one of two concerns for players of the time. The other was the retain-and-transfer system, which gave the clubs complete authority regarding player movement from one club to another. Together, the two matters nearly prompted a player strike in January 1961, backed by the Professional Footballers' Association and their chairman, Jimmy Hill (pictured, at left).

Hill, who played for Brentford from 1949-52, then for Fulham from 1952-61, became the PFA chairman in 1957 and continued the organization's longstanding opposition to the wage restriction. The Football Association and the Football League, however, argued that the £20 weekly wage was a fair one, being 25% higher than the average industrial wage at the time. But at a PFA meeting earlier that January, Bolton's Tommy Banks generated support for a challenge, pointing out that anyone could take a crack at being a miner, but few miners could play football in front of 30,000 spectators every week.

The threat of the impending strike forced the authorities to capitulate and lift the wage. While many players saw their wages doubled as a result, Hill's Fulham teammate Johnny Haynes was the greatest beneficiary, becoming England's first £100-a-week player.

Since then, wages have increased dramatically, with several of the Premier League's top players pulling in a reported £200,000 per week.

The retain-and-transfer system remained in place until 1963.
Posted by Brian Seal at 12:01 AM