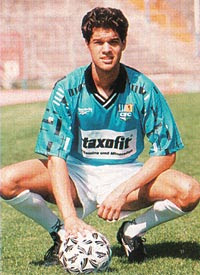 On 4 August 1995, 18-year old Michael Ballack made his professional debut for 2.Bundesliga side Chemnitzer FC. He would go on the become a three-time German Footballer of the Year, winning four Bundesliga titles and one Premier League title.

Chemnitzer lost Ballack's first match, 2-1 against VfB Leipzig, and were relegated at the end of the season. Ballack remained with them for one season in the third division, then moved to the top flight in 1997 with Kaiserslautern. He spent two seasons with Kaiserslautern, winning his first Bundesliga title in 1998, then played three seasons for Bayer Leverkusen (1999-2002) before moving to Bayern Munich. He enjoyed his greatest success at Bayern, winning league and German Cup doubles in 2003, 2005, and 2006.

In 2006, Ballack moved again, this time to Chelsea FC, helping the Blues to the FA Cup in his first season. Another FA Cup followed in 2008, the same year Chelsea advanced to the Champions League Final, then he won the fourth double of his career with the 2010 FA Cup and Premier League title.

Ballack recently returned to Bayer Leverkusen, signing a 2-year contract in the summer of 2010.
Posted by Brian Seal at 12:01 AM