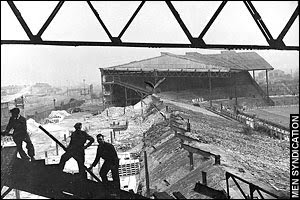 On 24 August 1949, Manchester United returned to Old Trafford, playing a League fixture there for the first time in over ten years.

Old Trafford, nicknamed the "Theatre of Dreams," has served as United's home ground since 1910. But after the 1938-39 season, the FA suspended League play for the duration of World War II, with United's last match before the break being a 2-0 win over Liverpool.

During the war, German bombing runs twice hit Old Trafford, rendering it unusable. As described by a report in the Telegraph, "The spectacular main grandstand lay in ruins, what was left of the vast, sweeping terracing was overgrown with weeds, a thorny 6ft high bush had sprouted in the middle of the scorched pitch, a couple of threadbare Nissen huts served as dressing rooms and offices, and the 'training pitch' was a levelled-off area of rubble behind the Stretford End; the 'Theatre of Dreams' was a landscape of nightmares."

When League play resumed in 1946, United were still in the process of rebuilding the stadium (see photo). For the next three seasons, they played their home matches at Maine Road, the home of rivals Manchester City (£5,000 a year plus a take of the gate). By the start of the 1949-50 season, the stadium was not fully rebuilt, but was ready for play and 41,748 people showed up to watch United defeat Bolton 3-0.
Posted by Brian Seal at 12:01 AM