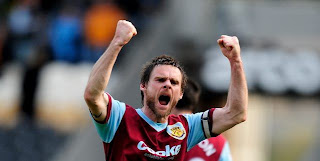 Oddly enough, Alexander was starting his fourteenth season as a professional, having spent all of that time in England. In 1991, he signed his first professional contract with his youth club, Scunthorpe United, then in the Fourth Division. After three seasons there, he moved to Luton Town (1995-99), then Preston North End (1999-2007), before moving to Burnley in 2007. Burnley's promotion for the 2009-10 season, however, gave him his first chance to play in the English top flight.

His Premier League debut was inauspicious - Burnley lost 0-2 to Stoke City and were eventually relegated - but Alexander made 33 appearances and scored seven goals. He had captained the side against Stoke that day in place of injured skipper Steven Caldwell and was named the full-time captain for the 2010-11 season.
Posted by Brian Seal at 12:01 AM