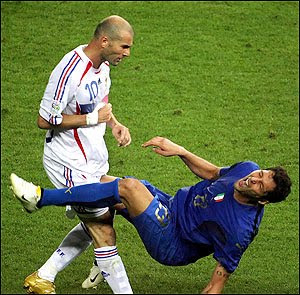 On 9 July 2006, Italy won their fourth World Cup title in a dramatic match against France that ended in a penalty shootout. It was the last competitive match played by three-time FIFA World Player of the Year Zinedine Zidane, who was ejected in extra time after headbutting Italian defender Marco Materazzi.

France had struggled to get out of the group stage, managing only one win and two draws, but advanced through the knockout rounds with impressive wins over Spain (3-1), Brazil (1-0), and Portugal (1-0). Italy, meanwhile, won their group with ease before defeating Australia (1-0), Ukraine (3-0), and Germany (2-0, aet) to reach the Final.

France went ahead in the 7th minute after the referee awarded a controversial penalty for an apparent foul on Flourent Malouda, though replays suggested Malouda had gone down in the box with minimal contact. Zidane converted to put France up 1-0. But Italy drew level twelve minutes later when Materazzi headed the ball in from a corner kick. The teams then stayed even at 1-1 through regulation and extra time.

During the second extra time period, Zidane and Materazzi exchanged words and Zidane responded by head-butting the defender in the chest and earning a 110th-minute ejection. Reports later claimed that Materazzi had made offensive remarks about Zidane's sister. Zidane was thus unavailable for the penalty shootout, which Italy won 5-3. The only miss came from French striker David Trezeguet, who bounced his shot off the bar.

Despite the ejection, Zidane was named to the tournament's all-star team and won the Golden Ball as that Cup's most valuable player.