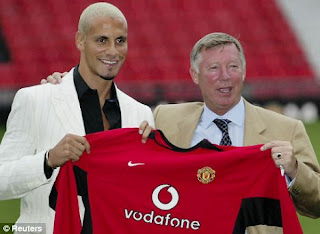 On 22 July 2002, Leeds United center back Rio Ferdinand joined Manchester United for a British record transfer fee of £30 million. It was the second record-setting transfer fee for Ferdinand, who had already become the world's most expensive defender.

Ferdinand got his start with West Ham, where he played from 1995 to 2000. In November 2000, he moved to fellow Premier League side Leeds United for a fee of £18 million - the highest fee ever paid to that point for a defender, as well as the most for a British footballer (only France's Nicolas Anelka and Argentina's Juan Sebastián Verón had been sold for more, though Veron also went to Manchester United).

Ferdinand played for two seasons at Elland Road and captained the side in 2001-02. But financial pressures forced the club to offload a number of star players and Ferdinand moved to Manchester United. The two teams initially agreed on a base transfer fee just under £30 million, with conditional performance clauses that could raise the payments, but Leeds' need for cash resulted in a lump-sum £30 million payment.

The move has been good for Ferdinand, who has won four League titles and the Champions League with United.
Posted by Brian Seal at 12:01 AM