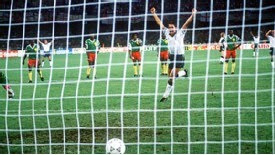 On 1 July 1990, England needed an extra-time penalty kick to beat Cameroon in the World Cup quarterfinals, 3-2. It was a painful end to the tournament for Cameroon, who had been seven minutes away from becoming the first African side to reach the World Cup semi-finals.

It was the second consecutive extra-time match for both sides, with Cameroon getting past Colombia 2-1 thanks to two Roger Milla goals while England squeaked by Belgium 1-0 with a 119th-minute goal from David Platt, making his first World Cup appearance. Both goalscorers featured in the quarterfinal matchup.

It was an energetic, attacking match, full of scoring chances for both sides, but Platt, making his first start in the tournament, sent England ahead with a 25th-minute header. Trailing 0-1 at the break, Cameroon introduced Milla at the start of the second half and he instantly built momentum for his side, leading to two goals in quick succession by Emmanuel Kundé (61', pen.) and Eugène Ekéké (65') to put Cameroon up 1-2. But in the 83rd minute, England striker Gary Lineker was tripped in the box and converted the ensuing penalty kick to level the match at 2-2.

Both sides continued to attack in extra time, but the match was decided by yet another penalty, as Cameroon keeper Thomas Nkono tripped a charging Lineker to concede the spot kick. Lineker converted it to send England through to the semifinals where they lost to West Germany on penalties, prompting Lineker's famous quote: "Football is a simple game; 22 men chase a ball for 90 minutes and at the end, the Germans always win."