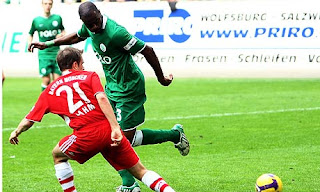 On 4 April 2009, upstart Bundesliga side VfL Wolfsburg reached the top of the table by crushing the previous season's champions, Bayern Munich, 5-1 before a sellout crowd of over 31,000 at Wolfsburg's Volkswagen Arena. The small northern German side never looked back, remaining at the top to claim their first Bundesliga title at the end of the season.

Wolfsburg entered the match full of optimism, riding a seven-game winning streak that started in the first week of February with a 2-0 home win over VfL Bochum. And they had already beaten Bayern in Munich 2-4 earlier in the season.

On the day, Wolfsburg and Bayern were tied for second, even on points (48), goals scored (53), and goals allowed (31). The sides remained even through the first 45 minutes, exchanging late first-half goals from Wolfsburg's Christian Gentner and Bayern's Luca Toni. But in the second half, the balance shifted in Wolfsburg's favor with a quick brace from Bosnia striker Edin Džeko (63', 66'), then a goal from his Brazilian teammate Grafite (74'). Grafite (pictured) later matched his strike partner's tally, capping off the win with a brilliant 77th-minute backheel that was hailed as one of the best Bundesliga goals in history.

The win was especially sweet for manager Felix Magath, who arrived in Wolfsburg in 2007 after having been sacked from Bayern earlier in the year. It lifted Wolfsburg into first place, where they remained for the rest of the season after winning six and drawing two of their last eight matches.