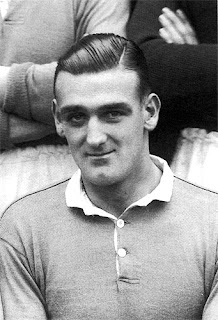 On 17 April 1937, Scotland hosted England at Glasgow's Hampden Park for the last match of the 1937 British Home Championship. The official attendance at the match was 149,415, which set a world record at the time and remains a record for European competition.

The two sides were competing for second place, as Wales had already secured the title by winning all three of its matches. Scotland and England, meanwhile, had identical records - both had 2-1 losses to Wales and 3-1 wins over Ireland. On the day, Scottish striker Bob McPhail (pictured) provided the decisive edge, scored 2 goals in the Scots' 3-1 win over the English.

The true attendance figure for the day is unknown, as a large number of people reportedly entered the stadium without paying. But the official recorded attendance of 149,415 was, at the time, the largest football crowd in world history. That number was subsequently surpassed on the last day of the 1950 World Cup, when Uruguay upset Brazil 2-1 at the Maracaña in Rio de Janeiro. FIFA recorded the official attendance for that match as 173,850, but, like the previous record, it does not include a large number of attendees who entered the stadium illegally.

The 1937 figure, however, remains the highest recorded attendance for a European match.
Posted by Brian Seal at 12:01 AM