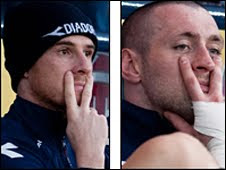 On 3 April 2009, the Scottish FA announced that Scotland internationals and Rangers teammates Barry Ferguson and Allan McGregor were banned from making any further national team appearances. The bans were the result of the duo's conduct over the previous week, which included a late-night drinking session after a Scotland loss to the Netherlands on 29 March and making "rude gestures" while on the bench for a match against Iceland on 1 April.

Ferguson had been a stalwart for Scotland, earning his 45th cap in the match against the Netherlands - 28 of those as captain. He was also a key player for Rangers, having played for them from 1994 to 2003, then returning at the start of the 2005-06 season when he was given the captain's armband by then-manager Alex McLeish.

McGregor, by contrast, had made only 6 appearances for Scotland before the ban. But he had played for Rangers since 2001, with a couple of loan spells in the 2004-05 and 2005-06 seasons, and had captained the club in the absence of Ferguson.

Although both players had started against the Netherlands, manager George Burley dropped them to the bench against Iceland because they had violated team rules by staying out staying past curfew. While that alone would likely not have been enough to cause their dismissal, they compounded the situation by making rude "v-signs" to the cameras during the Iceland match. Upon learning of the gestures, the SFA sent the pair home from training, then issued the ban on 3 April. Rangers also took action, suspending both players for two weeks and stripping the captaincy from Ferguson.

It may not be the end of the road for the pair, however. New Scotland manager Craig Levein has expressed his desire to select both Ferguson and McGregor, though he has not yet done so.
Posted by Brian Seal at 12:01 AM