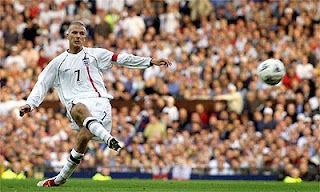 On 6 October 2001, England midfielder and captain David Beckham converted a spectacular free kick in the last minute of stoppage time to equalize with Greece 2-2 in a World Cup qualifier at Old Trafford in Manchester, England.

England went into the match needing a win or a draw in order to ensure automatic qualification for the 2002 World Cup Finals. The Greek side disrupted those plans with a 36th-minute strike from forward Angelos Charisteas to go up 0-1.

Still down in the 67th minute, England manager Sven Göran Eriksson subbed striker Robbie Fowler out in favor of striker Teddy Sheringham. Sheringham quickly rewarded Eriksson's faith, heading in an equalizer within ten seconds of stepping foot on the pitch--the fastest goal ever by an England substitute. England's euphoria did not last long, however, as in the 69th minute, Greek striker Demis Nikolaidis evaded defender Rio Ferdinand and fired the Greeks back into the lead.

England continued to trail, when, in the 93rd minute, they were awarded a free kick from about 30 yards out in the center of the pitch. Beckham, who had already taken five unsuccessful long-range free kicks in the match, stepped up and delivered a powerful bending right-foot shot into the top left corner of the goal.

The whistle blew shortly afterward, with England claiming the 2-2 draw and automatic qualification for the 2002 World Cup. It was a watershed moment for Beckham, who had previously been hounded by the British press and supporters for his red-card performance in England's loss to Argentina in the knockout stages of the previous World Cup. The goal against Greece, as well as Beckham's overall inspired play and leadership, transformed him from national villain to national hero.