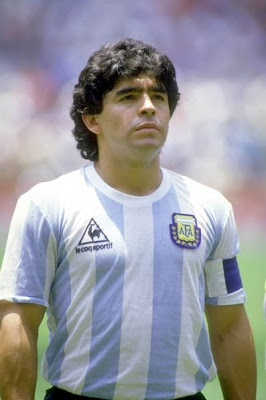 On 30 October 1960, future Argentinian superstar Diego Maradona was born in the city of Lanús, Argentina.

Raised in poverty on the outskirts of Buenos Aires, Maradona joined Argentinos Juniors as a 10-year old youth player. He signed his first professional contract with them in 1976 and made 167 appearances before transferring to Boca Juniors in 1981.

After an impressive performance for Argentina in the 1982 World Cup, he moved to Barcelona for a then-record fee of £5 million. Although successful during his time in Spain, winning a 1983 treble of the Copa del Rey, Copa de la Liga, and Spanish Super Cup, his relationship with the club was tempestuous and he moved to Napoli in 1984 for a new record fee of £6.9 million.

He became a true international superstar in 1986, when he captained Argentina to the World Cup title, playing every minute of every match for the Albicelestes, scoring 5 goals and making 5 assists. Two of those goals came in the legendary 2-1 win over England--the "Hand of God" and the "Goal of the Century," which cemented his status as one of football's greatest players. He followed his World Cup success by winning silverware with Napoli, including two Serie A titles (1987, 1990) and the UEFA Cup (1989). He left Napoli in 1991 and spent time with Sevilla (1992-93), Newell's Old Boys (1993), and a second stint at Boca Juniors (1995-97) before retiring.

Despite a controversial personal life, including a constant struggle with a cocaine addiction, Maradona was voted FIFA's Co-Player of the Century in 2000, along with Pelé.

Maradona currently manages the Argentinian national team, who recently secured their spot in the 2010 World Cup Finals despite a rocky start to qualification.