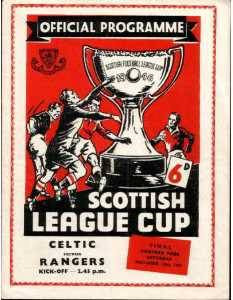 On 19 October 1957, Celtic defeated Rangers 7-1 in the Scottish League Cup Final before a crowd of 82,293 at Hampden Park in Glasgow. The match set the record scoreline for a British cup final, and ranks as the greatest margin of victory in an Old Firm derby as well as Rangers' greatest defeat.

The stage was set for high drama from the beginning, as it was the first League Cup Final to be contested by the Old Firm. Celtic entered the match as Cup holders, having won it the previous season, while Rangers were the defending league champions.
The Hoops dominated the first half, though Rangers managed to keep a fairly respectable scoreline. Celtic forward Sammy Wilson scored the first goal from a cross in the 22nd minute and winger Neil Mochan doubled the advantage in the 44th minute.

After the break, Celtic forward Billy McPhail extended the lead to 3-0 in the 53rd minute before Rangers forward Billy Simpson pulled one back in the 58th minute. Then the floodgates opened. McPhail scored his second in the 67th minute, then Mochan did likewise in the 75th. McPhail netted another in the 80th minute to complete his hat-trick. He was fouled in the box in the 90th minute, but deferred the kick to right-half Willie Fernie, who converted to close the scoring at 7-1.

The match was nicknamed "Hampden in the Sun," after a song sung by Celtic supporters to the tune of Harry Belafonte's hit song "Island in the Sun," which had climbed the UK singles charts that summer.
Posted by Brian Seal at 12:01 AM