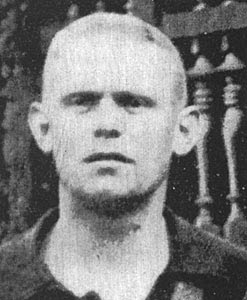 On 12 October 1902, Austria defeated Hungary 5-0 in a Vienna friendly. It was the first match for both national sides and the first international match in history to feature two non-British teams.

The match was played at the ground of Wiener A.C. and the Viennese club's players scored all five goals in the Austrian victory. Striker Josef Taurer put the Austrians ahead with a goal in the 5th minute, then striker Johann Studnicka (pictured) added a second in the 10th minute. Studnicka and Gustav Huber then extended the lead to 4-0 before Studnicka scored the final goal to complete his hat-trick.
Eventually, both sides went on to claim glory as two of Europe's most successful teams. Austria's "Wunderteam" rose to prominence in the 1930s, winning the 1932 Central European Cup (the predecessor of the European Championship), while Hungary's "Golden Team" went on a 50-match unbeaten run between 1950 and 1957 and won the gold medal in the 1952 Summer Olympics.
Posted by Brian Seal at 12:01 AM