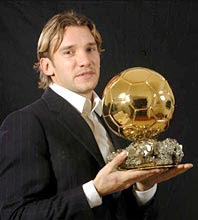 On 29 September 1976, Ukrainian international and Ballon d'Or winner Andriy Shevchenko was born in the Soviet village of Dvirkivschyna, located in the Kiev province of what is now the independent state of Ukraine. He would grow up to become one of the most celebrated strikers in Europe.

Shevchenko played his youth team football for Dynamo Kyiv, with whom he signed his first professional contract in 1994. He went on to make 166 appearances for Kyiv, scoring 94 goals. Along the way, he helped them win five consecutive Ukrainian Premier League titles (1995-99), three Ukrainian Cups (1996, 1998, 1999), and three Commonwealth of Independent States Cups (1996-98).

In 1999, he moved to AC Milan for a $25 million transfer fee. He was an instant success for the Rossoneri, scoring 24 goals in 32 league matches to claim the Serie A scoring title in his debut season. It was the first season in Shevchenko's professional career that he did not win a league title, however, as Milan finished third, behind Lazio and Juventus. He earned his first silverware with Milan in 2003, winning both the Coppa Italia and the UEFA Champions League trophies. Milan won the Scudetto the following season, with Shevchenko again finishing as the league's top scorer. 2004 was a good year for him, as FIFA also awarded him the Ballon d'Or. All told, he made 296 appearances for Milan in all competitions, scoring 173 goals.

In 2006, Shevchenko transferred to Chelsea, who paid £30.8 million for his services, setting a record for the highest fee paid by an English club. His time at Chelsea was less successful, as injuries and disagreements with manager Jose Mourinho, and later Avram Grant, limited his playing time. He played only two seasons for Chelsea, who then loaned him back to Milan for the 2008-09 season. In the fall of 2009, he returned to Ukraine and his old club, Dynamo Kyiv.