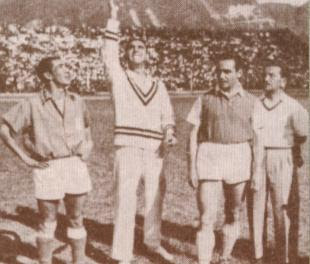 On 19 September 1948, Santa Fe defeated local rivals Millonarios 5-3 in the first official Bogotá derby, El Clásico Capitalino. (The coin toss for that match is shown to the right, with Sante Fe's captain on the right and Millonarios' captain on the left).

Millonarios was founded in 1946, though it traces its history back to 1937 through two earlier versions of the club. The name "Millonarios" had originally been a nickname given to the club for its heavy spending to bring in foreign players. Santa Fe was founded in 1941 in a Bogotá café and was named after the street on which the café was located.

The clubs first met in a local league match in 1942, when Millonarios were known as Club Deportivo Municipal, but the 1948 derby was the first meeting between the clubs as they currently exist and the first in the División Mayor del Fútbol Profesional Colombiano ("Dimayor" for short). 1948 was the inaugural season for the Dimayor, who had just seceded from FIFA over a dispute with the Colombian amateur football organization.

Both Millonarios and Sante Fe benefitted from working outside FIFA's constraints on transfer and player payments, and both were able to lure high-profile signings from both sides of the Atlantic. Millonarios acquired Alfredo di Stéfano and Adolfo Pedernera from River Plate, while Sante Fe signed Neil Franklin from Stoke and Charlie Mitten from Manchester United.

Santa Fe won the Dimayor in that first season, while Millonarios won it the next year. Between them, Santa Fe and Millonarios have won 19 first division titles, though the last title for either club was Millonarios' title in 1988.
Posted by Brian Seal at 12:01 AM