20 September 2007 - The Special One Has Left The Building 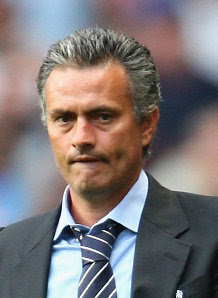 On 20 September 2007, Chelsea manager José Mourinho left the club "by mutual consent." The move was unexpected and reportedly was precipitated by confrontations between Mourinho and club owner Roman Abramovich.

Mourinho joined Chelsea in June 2004 from Porto. He had just completed a string of successes at the Portuguese club, including a 3-0 win over Monaco in the 2004 UEFA Champions League Final the previous month. In an early press conference with Chelsea, he told reporters "I'm European champion and I think I'm a special one," which led to the press giving him the nickname "The Special One."

The nickname proved well-earned, as Chelsea won the Premier League in each of their first two seasons under the often-controversial Mourinho--a remarkable feat for a club who won their last (and only prior) league title in the 1954-55 season. And before his departure, Mourinho had won every other domestic trophy available to him: the FA Cup (2007), the League Cup (2005, 2007), and the FA Community Shield (2005).

His relationship with Abramovich was strained from the beginning, however. The owner acquired Ukrainian striker Andriy Shevchenko from Milan over Mourinho's objections and Shevchenko's playing time, or lack thereof, became a point of contention. Abramovich also installed Avram Grant as Director of Football, again over Mourinho's objections. Tensions were increased when the Blues struggled at the beginning of the 2007-08 season, losing away to Aston Villa and drawing at home to Blackburn Rovers. The final straw for Mourinho was a 1-1 home draw with Norway's Rosenborg in Chelsea's opening Champions League match on 18 September 2007. Mourinho left the club three days later.

He was succeeded by Avram Grant, who led the Blues to the Champions League Final, but lost to Manchester United. Chelsea also finished runners-up to United in the league and to Tottenham in the League Cup, but finished the season without winning any silverware.

In June 2008, after a season out of football, Mourinho signed with Serie A champions Inter and retained the Scudetto in his first season.
Posted by Brian Seal at 12:01 AM