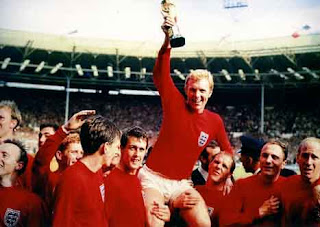 Moore, who played for West Ham from 1958 to 1974, earned his first senior cap for England in May 1962 in a 4-0 friendly victory over Peru. He played a significant role for England in the 1962 World Cup, which ended in a quarterfinal defeat to eventual winners Brazil.

His appearance on 29 May 1963 was only his 12th for the national team. Long-serving captain Johnny Haynes had just retired and his immediate successor, Jimmy Armfield, was injured, leading new manager Alf Ramsey to hand the captain's armband to Moore. He rewarded Ramsey's faith by leading the team to a 4-2 win over Czechoslovakia.

Armfield reclaimed the captaincy upon his return, but Moore received it permanently in 1964. He led England to victory in the 1966 World Cup, which made him an English football icon. He made a total of 108 appearances for the national team, a record at the time that was later surpassed by goalkeeper Peter Shilton (125 caps) and David Beckham (109, as of the time of this writing).