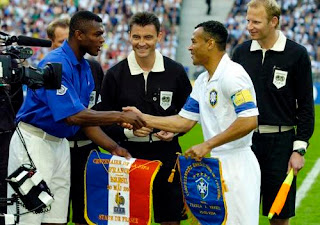 On 20 May 2004, FIFA organized a friendly re-match of the 1998 World Cup Final between France and Brazil. FIFA was founded on 21 May 1904 and organized the match to honor its centennial.

The friendly, like the original match, was played at Paris' Stade de France, but this time before a crowd of 79,344 - a new attendance record for the French national team. The match featured a virtual galaxy of stars, including Roberto Carlos, Ronaldo, Ronaldinho, and Kaká for Brazil and Marcel Desailly, Zinedine Zidane, Thierry Henry, and David Trezeguet for Les Bleus.

Unlike the 1998 Final, which was a 3-0 victory for France, the friendly ended as a scoreless draw. That in itself was historic, as never before in the ten previous meetings between the two countries had a match ended without a goal.
Posted by Brian Seal at 12:01 AM