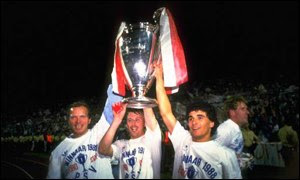 On 25 May 1988, PSV Eindhoven won the European Cup Final, defeating Benfica on penalties 6-5 before a crowd of 70,000 at Neckarstadion in Stuttgart.

Benfica had beaten Albanian side Partiziana Tirana, Danish side Aarhus Gymnastikforening, Belgian side Anderlecht, and Romanian side Steaua Bucharest on their way to the Final, but had just lost their captain, midfielder Diamantino Miranda, to injury before the match. With him unavailable, the Portuguese team played very conservatively, keeping 11 men behind the ball for much of the match.

PSV made it to the Final with victories over Galatasaray, Rapid Vienna, Bordeaux, and Real Madrid, advancing against the last two teams by virtue of the away goals rule. Although PSV dominated possession in the Final, they could not break through Benfica's defense and the teams were scoreless through extra time, sending the match into penalty kicks.

Neither side had trouble finding the net during the initial penalty period, with both sides converting their first 5 shots each. In sudden death, midfielder Anton Janssen scored PSV's first kick. On Benfica's following attempt, Dutch keeper Hans van Bruekelen guessed correctly, diving low to his right, and saved the kick from back António Veloso.

The win completed a treble for the Dutch side and their manager, Guus Hiddink, who had already won the Eredivisie title and the Dutch KNVB Cup.