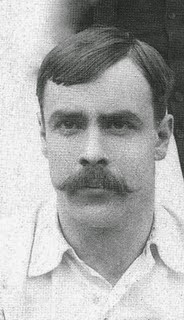 On 28 March 1903, center-half Archie Goodall (pictured) scored the opening goal in Ireland's 2-0 victory over Wales in the 1903 British Home Championship. Goodall was 38 years and 283 days old, making him the oldest goalscorer in the history of the Irish national team.

Born in Belfast in 1864, Goodall spent his entire club career in England, starting with Preston North End in 1887. After one season in Deepdale and one with Aston Villa, he settled with Derby County for whom he made 380 league appearances (and scored 48 goals) between 1889 and 1903.
He received his first call up for Ireland in March 1899. Prior to that time, the Irish FA had refused to allow the national team to select footballers who were playing in clubs outside Ireland, making Goodall one of the first players based in England to don a shirt for the Irish national team.
Ireland's match against Wales on 28 March 1903 was their last of the tournament. Goodall's goal - the second and last of his international career - helped the Irish finish level on points with England and Scotland and, because there was no provision in the tournament rules to break a tie, the three sides shared the trophy equally. It was the first top finish for Ireland, who would finish as runners-up the following season, then win the title outright in 1914.
Goodall left Derby County in 1903 and spent a season with Plymouth Argyle before moving to Glossop North End as player-manager. After one season there, he moved to Wolverhampton in 1905, but made only seven appearances for Wolves before retiring later that year.
Posted by Brian Seal at 12:01 AM