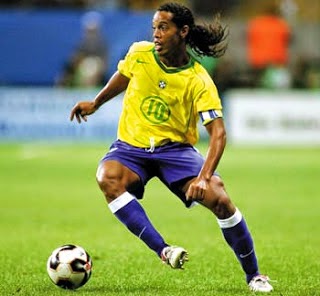 On 21 March 1980, two-time FIFA World Player of the Year Ronaldo de Assis Moreira was born in Porto Alegre, Brazil. Better known as Ronaldinho Gaucho--or more simply, Ronaldinho (for "little Ronaldo")--he would go on to win league titles and the UEFA Champions League with Barcelona as well as a World Cup with Brazil.


Ronaldinho started his professional career with his hometown club, Grêmio, joining his older brother, Roberto, there in 1998. An attacking midfielder, Ronaldinho scored 21 league goals for Grêmio between 1998 and 2001 before moving to Paris-St. Germain in a transfer deal worth €5.1 million. He stayed with PSG for two relatively successful seasons, but his time there was marked by a rift with managerLuis Fernández, who criticized him of focusing more on his social life than his football.

During his time in Paris, Ronaldinho was part of the Brazil squad that won the 2002 World Cup - his first time on football's biggest stage. He provided the match-winner in Brazil's 2-1 win over England in the quarterfinals. He was sent off eight minutes later and missed the semifinal, but returned to start for Brazil in their 2-0 win over Germany in the Final.

In the summer of 2003, he transferred to Barcelona for €32,250,000. He would have his greatest success to date with the Catalan club, winning the 2004-05 and 2005-06 La Liga titles as well as the 2006 UEFA Champions League Final. He collected a number of individual accolades during that period, including the 2004 and 2005 FIFA World Player of the Year Awards.

He left Barcelona in July 2008 for AC Milan, then returned to Brazil in 2011 to play for Flamengo, Atlético Mineiro, and his current club, Querétaro.