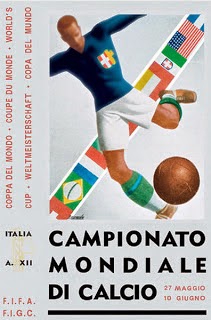 The 1934 tournament was only the second World Cup and the first to require qualification at all. FIFA had invited all member countries to compete in the previous tournament, but only 13 accepted the invitation, making qualification unnecessary. By 1934, however, the Cup had become more popular and 32 countries applied to compete. In order to winnow the number down to a manageable 16 for the tournament proper, FIFA split the 32 entrants into twelve groups. Most of the groups had two or three countries, though one had four. The groups were divided geographically, with Italy ending up in Group 3 with Greece.
When Italy and Greece met in Milan on 25 March, the Azzurri dominated the match from start to finish. The Greeks managed to hold the Italians off for the better part of the first half, but created few scoring chances of their own. In the 40th minute, Italy finally cracked the Greek defense with a goal from Brazilian-born Anfilogeno Guarisi. That goal opened the floodgates, as forward Giuseppe Meazza netted a brace (44', 71') around a strike from midfielder Giovanni Ferrari (69').
The Greeks were so disheartened by the beating that they withdrew from the competition despite the fact that they had been scheduled to play a second leg at home. Italy advanced to the First Round where they beat the United States 7-1 on their way to their first World Cup title.
For the 1936 World Cup, FIFA decided that the hosts should qualify automatically. That practice continues to this day, making Italy the only host in history to play a World Cup qualifier.
Posted by Brian Seal at 12:01 AM